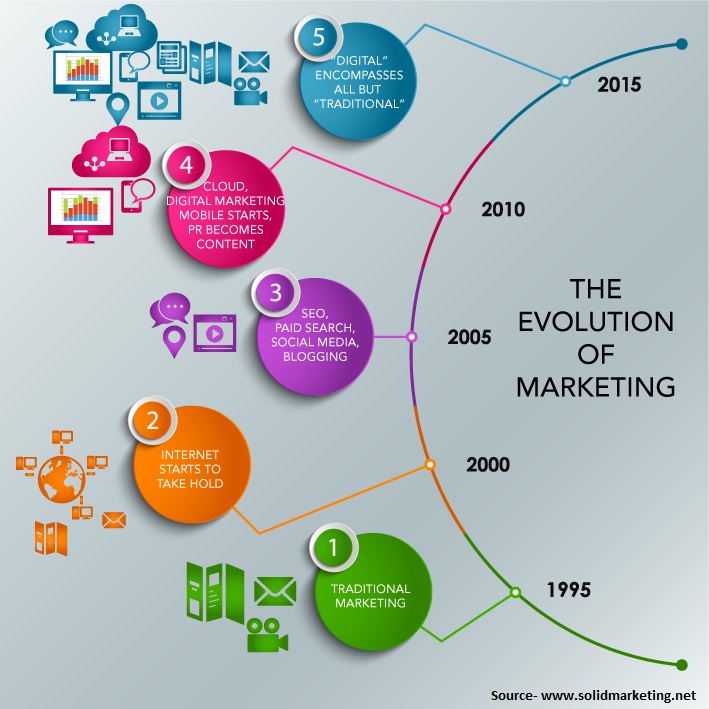 As explained in The Oxford Dictionary, Marketing is “The action or business of promoting and  selling products or services, including market research and development.” Concept of marketing is way too old. From when the human civilization started till the ending decades of 20th century, traditional marketing was in large fashion, however when in early 1990s internet was starting to explore in the commercial areas, the face of the marketing platform was also changing. This evolution of marketing started to reshape and redefine the traditional media into new forms such as emails, websites, internet communication, online music and videos.

As the internet started to come into full effect, the marketing platform also started to change from old traditional media like, T.V, Radio, Print, Newspaper e-t-c to email, websites, application. With this evolution new commercial websites came into the fore of marketing and from there on internet marketing evolved as a giant of a marketing strategies. As of now according to Wikipedia, about 51% of the world’s population has internet access and it is exponentially increasing day by day.

Increasing internet access to the world’s population indicates the reach of Desktops, PCs, and mobile Phones (smartphones) among the people. When Desktops became available home to home, it has decreased dramatically in size but through it the marketing enthusiasts could easily have demonstrated their strategies on online platform. The world of marketing changed a bit more when the PCs were introduced. It was now in hands of the people with more efficiency and effectiveness.  The people could carry this smaller but useful sort of thing with themselves and hence could control their marketing ideas in a much decisive manner.

A few years ago entered a device- smartphones. People could carry this device in their pocket. As Soon as it launched, the face of marketing changed drastically. With this it brought different dimensions to the marketing arena. The marketing word itself was digitalized as it became Digital Marketing with the launch of ever demanding new commercial websites and applications The revolution of mobile devices is one of the prime factor influencing the marketing world. As the focus is shifting to smaller screen, the brands will be able to strike up a more personalized relationship with their customers.

With the introduction of web applications, the concept of social media evolved. Earlier these platforms. Were meant for communication only but soon with the launch of smartphones, these platforms also started to establish themselves as a marketing giants. Social media has transformed the way that customer service function. Now customers have the ability to engage with their favorite brand online. The increased time spent on social media has shifted the marketing industry as through this, a large number of audience can be reached.

Analytics and the market mathematics is considered to be the purest language to calculate number if you use it correctly. Social analytics collect the data from social networking sites and help business companies better understand the customer’s need, customer’s security, customer’s attitude, build better relationships with customers and build new marketing strategies or ideas. It is a key to understand the conceptualizing business practices. Analytics give you idea about the customer’s behavior like site hit and density that help companies to target the audience.

Big Data is another aspect to understand the audience better. Most companies irrespective of their size agree that knowing the customer is the key to see their product better. Companies analyze customer behavior and needs like trends of shopping by studying the data. Users are constantly connected to the digital world. The data consumed each second is recorded and analyzed to better target.

The field of marketing has undergone a massive change in the last few years. The internet has really come up in a large way as far as competition for advertising rupees is concerned. Another thing that is of importance is the range of advertising and how many consumers will be exposed to it. With the involvement of social media, blogging platform etc, the marketing entrepreneur who are all very excited in their field, Digital Marketing brings even more excitement to them. There is a vast scope of digital marketing in sales and services. As the market is huge, new development strategies can be introduced which will help customers in gaining what they want from organization. The World is not same since the evolution of Digital Marketing and won’t be same ever again.

koak
KOAK stands for "Knowledge of all Knowledges”. A phrase picked from Bhagwat Gita which highlights, the importance of knowing oneself. Having known which there is nothing more to be known. Philosophy and all offerings of the company are based upon this principle. The company provides solutions for human performance improvement. The company primarily deals in skilling individuals to make them employable and more effective in whatever they do. KOAK works with colleges and corporate. Company specialises in Digital Marketing, Oracle Technologies, Manual and Automated Testing and a few other specialised technical courses. KOAK also delivers customised campus recruitment training and PDP programs at colleges. KOAK has invested heavily and created a few very niche Management Development Programs and Faculty Development Programs. While keeping scale in mind company also takes cognizance of the fact that a learner is not just a face, but a person whose ambitions are acknowledged and respected. Our effective feedback mechanism details out learner’s strengths make him or her aware of his mistakes gives him a chance of correcting them and documents his journey's progress in his preparation.

STILL NOT SURE WHAT TO DO?

We are glad that you preferred to contact us. Please fill our short form and one of our friendly team members will contact you back.